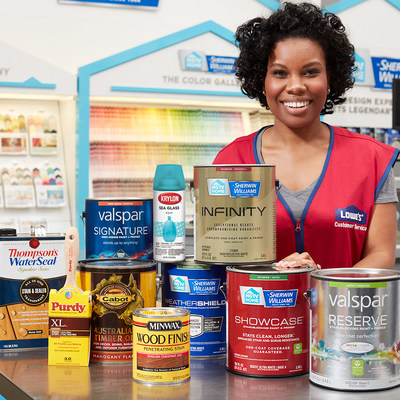 Lowe’s will introduce Krylon® spray paint in its fiscal first quarter and add new paint, stain and applicator programs over the course of the year.

Additionally, The Sherwin-Williams Company will become the only nationwide supplier to Lowe’s U.S. retail outlets for interior and exterior paints, including Valspar® and HGTV Home® by Sherwin-Williams brands.

“Sherwin-Williams is one of the most recognized brands for paint and highly respected for quality products by both do-it-yourselfers and professional customers. Sherwin-Williams’ family of brands is among some of America’s most trusted,” said Michael P. McDermott, Lowe’s chief customer officer. “We are proud to expand the partnership and bring customers more of the industry’s top brands for their next paint project.”

“We are excited to expand the partnership with Lowe’s to deliver a simplified paint and stain line that is designed to make it easier for customers to buy and associates to sell,” said Aaron Erter, President and General Manager of Sherwin-Williams’ Consumer Brands Division. “As paint continues to reign as the #1 do-it-yourself project, we know this expanded alliance will provide an improved experience that helps make customers more confident when selecting a color, product and applicator for their next paint or stain project.”

Lowe’s is also investing in its paint service model by rolling out a new paint desk experience beginning this quarter, with plans to complete the rollout nationwide in the second half of 2018. Combined with the simplified line design across multiple categories, the improved experience will also include an updated product selector display and a simplified and streamlined service model to make it even easier for customers to work with an associate to find a color, pick a paint or stain and begin a project.

About Lowe’s
Lowe’s Companies, Inc. (NYSE: LOW) is a FORTUNE® 50 home improvement company serving more than 18 million customers a week in the United States, Canada and Mexico. With fiscal year 2017 sales of $68.6 billion, Lowe’s and its related businesses operate or service more than 2,390 home improvement and hardware stores and employ over 310,000 people. Founded in 1946 and based in Mooresville, N.C., Lowe’s supports the communities it serves through programs that focus on K-12 public education and community improvement projects. For more information, visit Lowes.com.

Sherwin-Williams acquired The Valspar Corporation in 2017, and the combined company generated pro forma 2016 revenues of $15.8 billion and employs approximately 60,000 associates worldwide. It has a prominent market position in architectural paint in North America, South America, China, Australia and the UK.