MOORESVILLE, N.C., Aug. 26, 2017 /PRNewswire/ — In response to the widespread devastation caused by Hurricane Harvey in Texas, Lowe’s announced today a $500,000 contribution to American Red Cross Disaster Relief to help the Red Cross provide food, emergency shelter, relief supplies and comfort to those affected by disasters like Hurricane Harvey and countless other crises. Lowe’s is working with its national nonprofit partners to provide both immediate and long-term support to local communities. 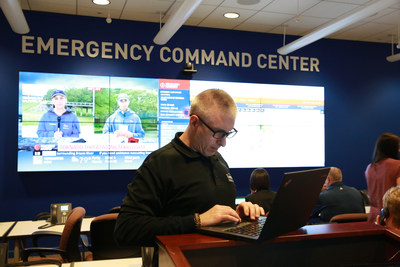 Lowe’s has also activated its American Red Cross customer donation program at its Texas stores to provide a convenient place for customers to make a donation. People also can make a contribution online through the Lowe’s American Red Cross Online Donation Site.

“Our thoughts and concerns are with those impacted by this storm, including our own Lowe’s employees,” said James Frison, Lowe’s community relations director. “As families begin the difficult recovery process, we want them to know Lowe’s will work closely with the Red Cross and our other partners to support their rebuilding efforts every step of the way.”

Lowe’s employs more than 23,000 people in Texas and in the coming weeks, Lowe’s Heroes volunteers will help with relief and recovery efforts in communities affected by the storm.

“Hurricane Harvey has caused widespread destruction and has impacted thousands of people,” said Don Herring, chief development officer at the American Red Cross. “We are so grateful for the generous support of Lowe’s to American Red Cross Disaster Relief, which enables us to prepare for, respond to and help people recover from disasters big and small.”

Lowe’s is also supporting employees affected by the storm through its Employee Relief Fund which provides financial assistance in times of crisis. Since it was established in 1999, the fund has helped approximately 26,000 employees by providing more than $29 million in financial aid.

As a member of the Red Cross’ Annual Disaster Giving Program, Lowe’s pledges donations on an ongoing basis in advance of disasters to help ensure the Red Cross can take immediate action. Since partnering with the Red Cross in 1999, Lowe’s and its customers have contributed more than $28 million for disaster relief.

About Lowe’s
Lowe’s, a FORTUNE® 50 home improvement company, has a 60-year legacy of supporting the communities it serves through programs that focus on K-12 public education and community improvement projects. In the past decade, Lowe’s and the Lowe’s Foundation together have contributed nearly $300 million to these efforts, and for more than two decades Lowe’s Heroes volunteers have donated their time to make our communities better places to live. For the latest news, visit Newsroom.Lowes.com or follow @LowesMedia on Twitter.