In honor of this Veterans Day, Lowe’s is proud to announce it has helped military families save nearly $1 billion through the company’s military discount, which offers 10 percent off on everyday purchases for veterans and active military servicemen and women. Lowe’s is founded by veterans and this discount is just one way Lowe’s will show its appreciation for military men and women this year. 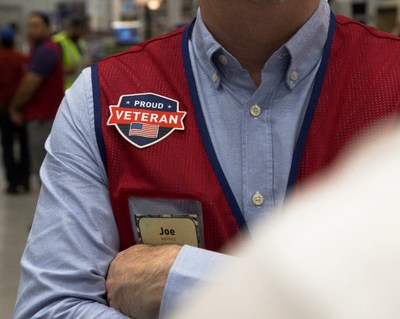 Lowe’s is also announcing expanded store benefits to recognize associates and customers in the military community. Lowe’s will now:

Lowe’s was recently named a Top 10 Military-Friendly® Brand by G.I. Jobs, a designation that acknowledges corporate or businesses’ efforts, commitments and success in supporting the military community. Lowe’s also offers employment opportunities for military personnel after their service ends. More than 14,000 military, veterans and military spouses currently work throughout the organization.

Currently, more than 650 associates are deployed to active duty. Lowe’s provides differential pay during their service, along with other benefits to help them and their families. Lowe’s also supports veteran-owned suppliers through its supplier diversity program and is actively involved in programs like the Employer Support of the Guard and Reserve (ESGR) and the Military Spouse Employee Partnership (MSEP).

“We recognize, honor and respect those who serve our country, and I am proud to announce this Veterans Day, that Lowe’s has helped military families save nearly $1 billion on their home improvement projects this year through our military discount program,” said Joe McFarland, Lowe’s executive vice president, stores and Gulf War and Desert Storm Veteran.

Lowe’s has offered discounts to veterans and active military servicemen and women for more than a decade as a way of saying thank you to service members and their families. The Lowe’s Military Recognition Program offers an everyday 10 percent discount on personal purchases to current and honorably discharged members of the U.S. Armed Forces. To enroll in the discount program, visit Lowes.com/Military.

About Lowe’s
Lowe’s Companies, Inc. (NYSE: LOW) is a FORTUNE® 50 home improvement company serving more than 18 million customers a week in the United States, Canada and Mexico. With fiscal year 2017 sales of $68.6 billion, Lowe’s and its related businesses operate or service more than 2,390 home improvement and hardware stores and employ over 310,000 people. Founded in 1946 and based in Mooresville, N.C., Lowe’s supports the communities it serves through programs that focus on K-12 public education and community improvement projects. For more information, visit Lowes.com.